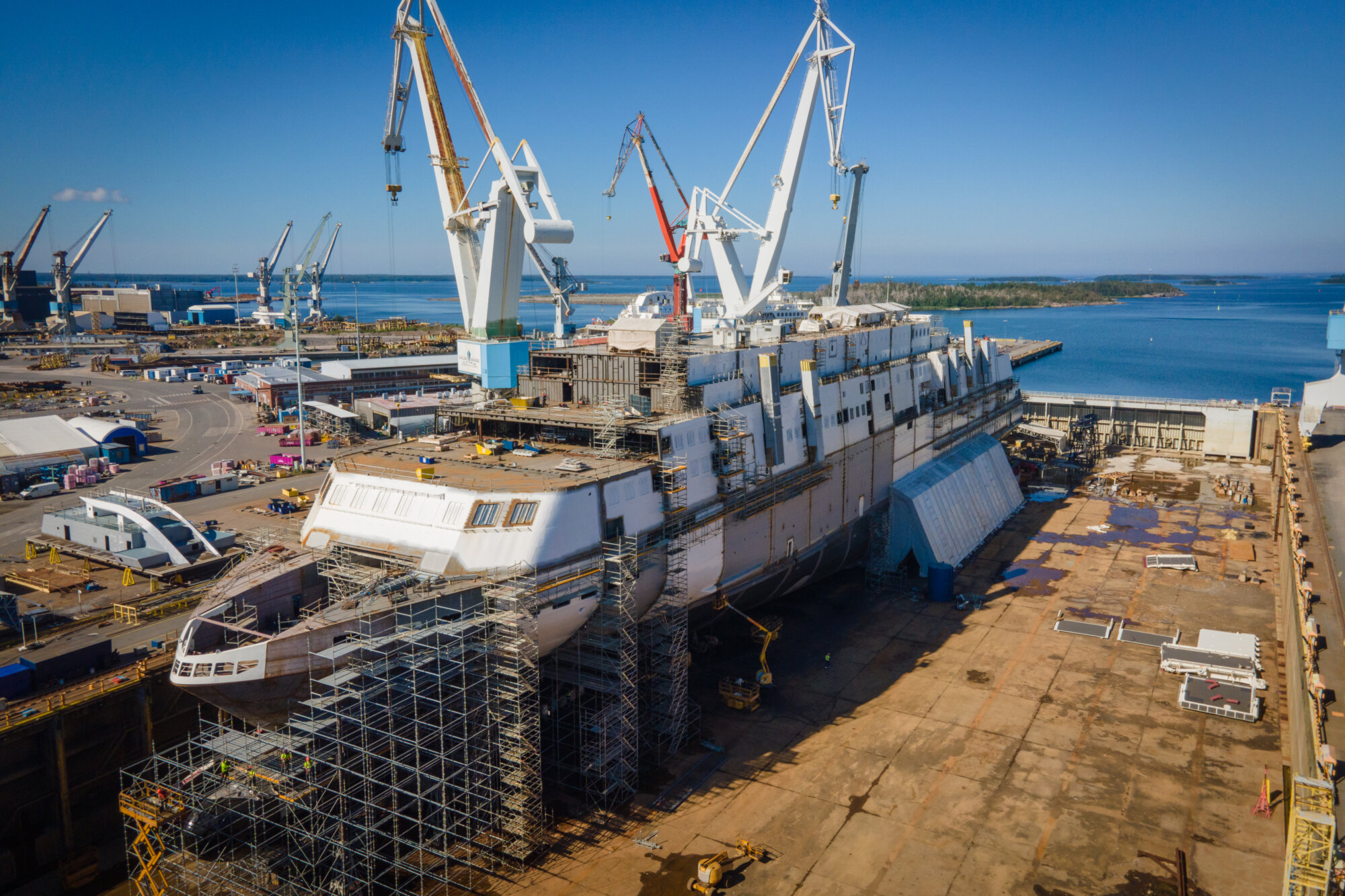 The construction of the largest car and passenger ferry in Rauma Marine Constructions‘ history was kicked off in April 2020 as the production of Tallink’s new shuttle ferry MyStar started at Rauma shipyard. Over the past year, the keel of the vessel has been laid and the main engines and tanks for LNG fuel have been installed. The vessel has reached its full length of 212 metres in the construction pool.

MyStar is currently being prepared for its christening and float-out ceremony, which will be held on 12 August 2021 at Rauma shipyard. The most environmentally friendly vessel to operate in the Baltic Sea is scheduled for delivery next year.

The route between Tallinn, Estonia, and Helsinki, Finland, is currently operated by Tallink’s flagship shuttle Megastar. The shuttle’s godmother is Tarja Halonen, former President of Finland. As MyStar will operate the same route in the future, the appropriate and logical choice for the vessel’s godmother is the President of Estonia Kersti Kaljulaid.

According to Paavo Nõgene, CEO of Tallink Grupp, the choice was strongly influenced by Kaljulaid’s distinguished work for the environment and to mitigate climate change both globally and in Estonia.

President Kaljulaid sees MyStar as part of the story of Estonian seafaring.

“Two years ago, when the Estonian vessel Admiral Bellingshausen embarked on her Antarktika200 expedition voyage, it helped us to tell several stories – to introduce Estonia as a seafaring nation, Estonia as a high-tech country, as well as to raise public awareness of global environmental issues. Although MyStar and Admiral Bellingshausen are very different, at first glance, however, the story that these two ships are telling us, is similar. Estonia is a seafaring country and every year, there are more Estonian-flagged vessels that proudly display our national colours. This time, the addition to the fleet of our national-flagged vessels is very special indeed – both in terms of its size and the technology onboard, as well as for aiming to further reduce the emissions. Also, similarly, Tallink plays a special role in the Estonian economy, both as an employer as well as enabling tens of thousands of people to travel to work,” said Kersti Kaljulaid, President of the Republic of Estonia, and MyStar’s godmother.

Promoting sustainable shipping and seafaring is also important for both Tallink and RMC.

“For us, this new vessel symbolises new hope for a better future, because ships which are more environmentally friendly and energy efficient mean a cleaner Baltic Sea and better living environment for all of us. The tandem of our vessels Megastar and MyStar, which will be operating on the Tallinn-Helsinki route in 2022, will create a green bridge linking Estonia and Finland. We are particularly pleased that despite the difficult pandemic year behind us, we have been able to proceed with our strategic key investment projects as planned and despite all the challenges, MyStar will be completed in 2022,” Nõgene says.

“MyStar is the seventh and the most energy efficient vessel that is built or designed for Tallink in Rauma. As a shipbuilding company, our goal is to be the pioneer of environmentally friendly shipping, and we are proud to be driving more sustainable seafaring between Finland and Estonia together with our important and long-term customer,” says Jyrki Heinimaa, President and CEO of Rauma Marine Constructions.

After the christening and float-out ceremony, the construction of MyStar will continue inside the ship. The next significant milestone in the construction phase will be the delivery of the ship to Tallink in 2022.

MyStar was chosen as the name of Tallink’s new ferry as the result of an international naming contest which was held last year. However, as is customary in shipbuilding, the vessel will not be officially named until the christening ceremony.

Throughout the long history of shipbuilding, the christening of a ship has been considered to bring good luck and a long life to the vessel. MyStar will be christened at Rauma shipyard by breaking a bottle of champagne on its shipside. If broken on the first try, the champagne will be a sign of a bright future. According to Tallink’s tradition, Champagne Nicolas Feuillatte Reservé Brut will be used for the christening.

MyStar will also reach another significant milestone at the ceremony in August as the ship’s seaworthiness will be tested by floating it out of the shipyard. Historically, the launch of a ship has been risky: a failure could cause severe damage to the vessel. At RMC’s shipyard. the float-out will be conducted safely by filling the construction pool with water.

Tallink MyStar in a nutshell