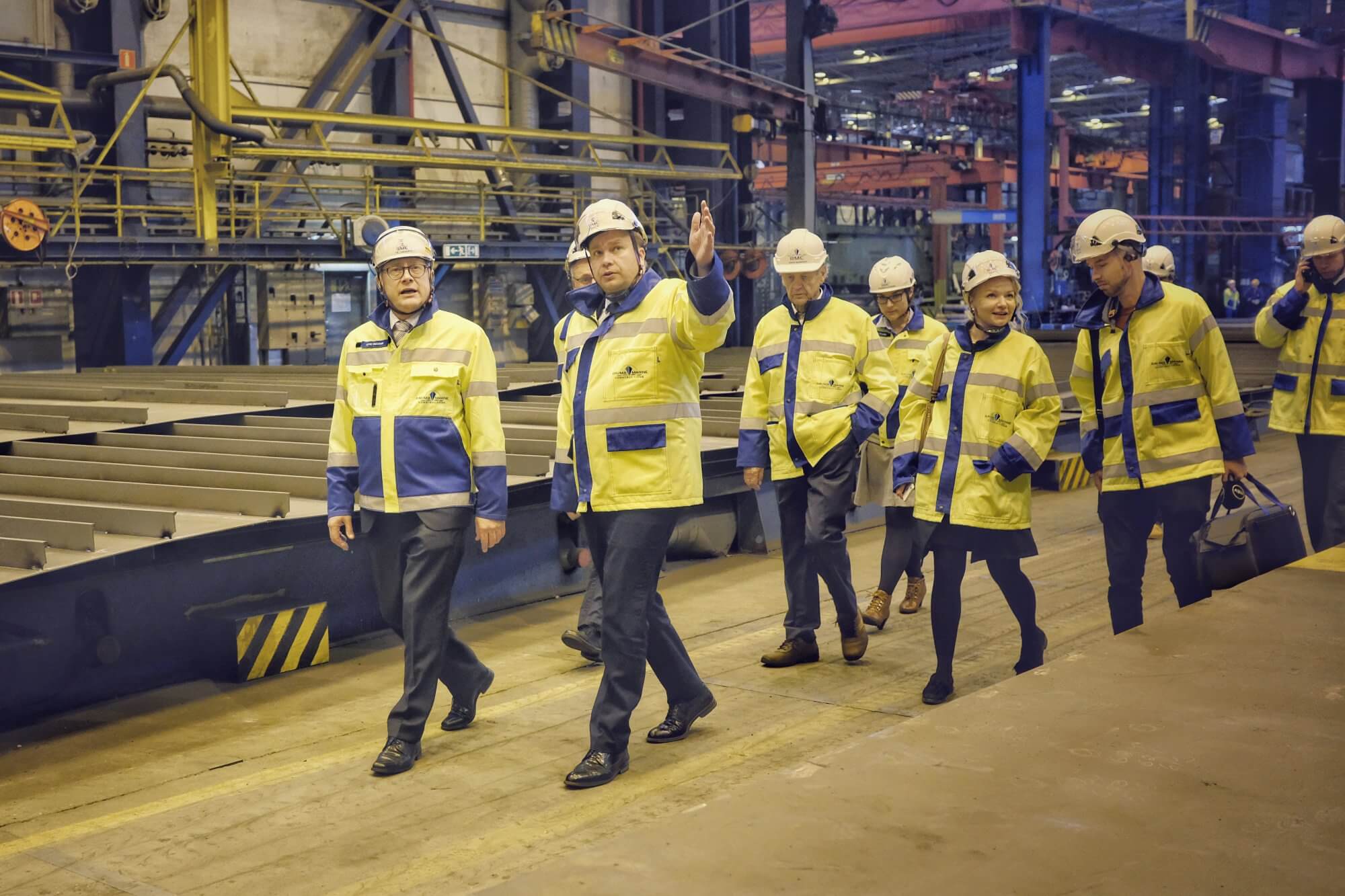 Finnish Minister of Defence Antti Kaikkonen, along with representatives from the Finnish Defence Forces, visited Rauma shipyard today as guests of Finnish shipbuilding company Rauma Marine Constructions (RMC). During the visit, Minister Kaikkonen was introduced to the ongoing projects at the shipyard. The parties also discussed the recently confirmed Squadron 2020 project, which was approved by the Finnish government last Thursday, September 19. The project includes the construction of four new multipurpose corvettes for the Finnish Navy, all of which will be constructed at Rauma.

Finnish Minister of Defence Antti Kaikkonen, along with his delegation, visited Finnish shipbuilding company Rauma Marine Constructions at Rauma shipyard today, 24 September, 2019. RMC and the Finnish Defence Forces came to an agreement last week regarding the construction of the new fleet for the Finnish Navy. As part of the visit, Minister Kaikkonen and guests received a tour of RMC’s facilities, including the shipyard’s ship block factory, where cruise ship blocks for Turku-based shipyard Meyer Turku are currently being constructed. Following the tour, the parties went on to discuss the Squadron 2020 project, which will replace a large number of the Finnish Navy’s existent fleet, consisting of seven vessels.

“I am very pleased that an agreement has been reached. In terms of security of supply, it is crucial that the vessels are built in Finland. The Rauma shipyard has impressive facilities and the know-how needed to successfully complete this highly demanding order”, says Kaikkonen.

Minister Kaikkonen was joined by his Chief of Staff Jukka Juusti and Lauri Puranen, Director, Strategic Projects Programme at the Ministry of Defence.

The procurement, which was approved by the government a week ago, is valued at approximately EUR 700 million. The design of the new fleet is already in full swing and the shipyard will start building the first corvette in 2022. The multipurpose corvettes will be delivered by 2026 and will be taken into operational use by the Finnish Navy in 2028. The procurement will have an impact on employment totalling around 3,600 person-years.

“Our business model is based on our extensive partner network. The projects that RMC oversees and manages can include up to hundreds of businesses. 80% of our workforce is domestic, which is rare in the Finnish export industry. Through the Squadron 2020 project, we will be able to employ thousands of people through our network”, says Jyrki Heinimaa, CEO, Rauma Marine Constructions.

“During the past five years, RMC has grown from a small startup to one of the leading expert organisations in the Finnish maritime sector. The order by the Finnish Defence Forces will bring RMC’s order book to over EUR 1 billion. When we count the order from the navy, along with our other confirmed orders this year, our order book will grow over 30,000 per cent”, notes Heinimaa.

RMC and the Defence Forces will formally sign the construction agreement on September 26. The combat system of the corvettes, including weapons and sensors, will be provided by Saab, accompanied by necessary design and installation services by RMC.