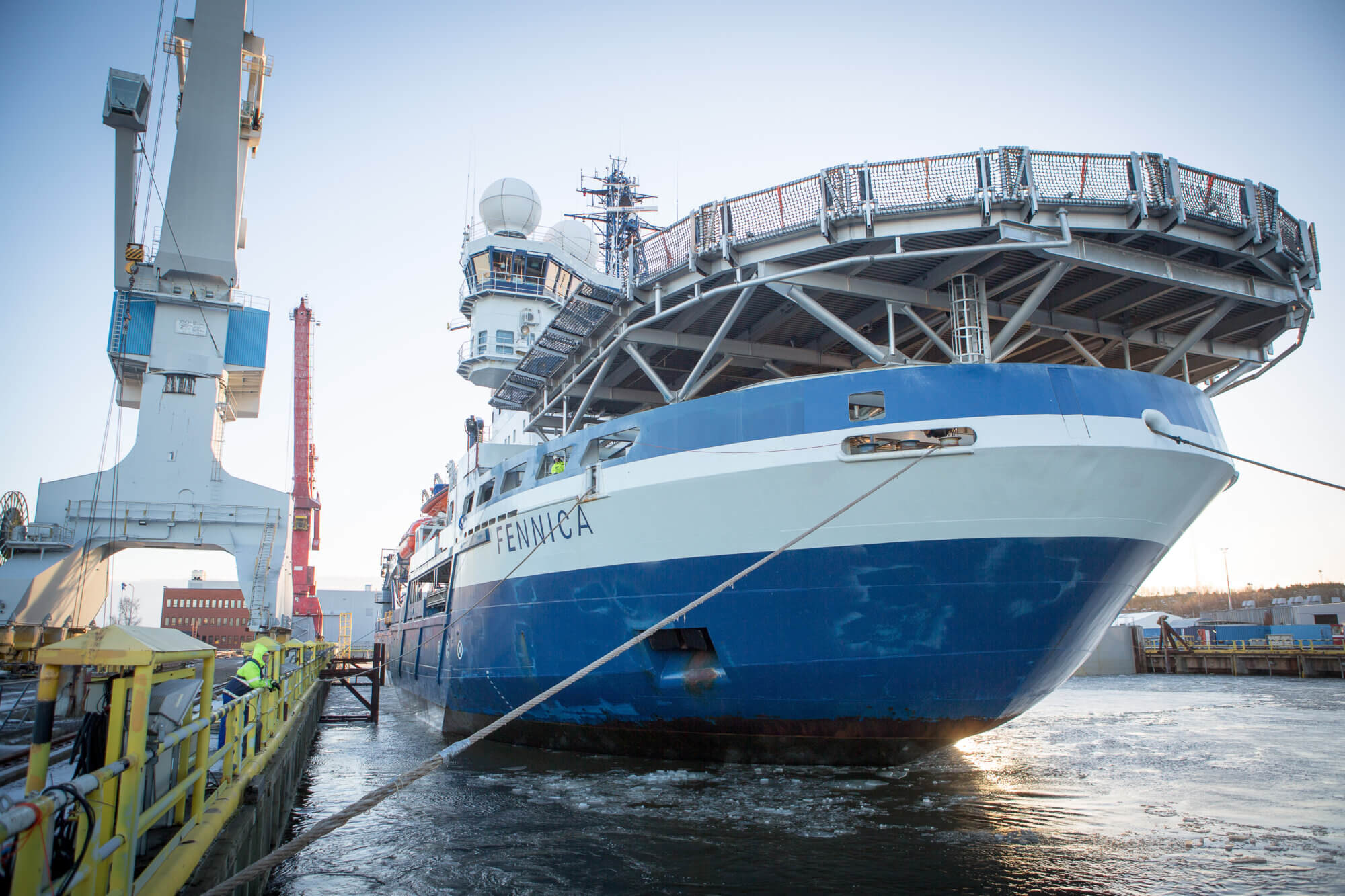 In addition to shipbuilding, Rauma Marine Constructions offers comprehensive life-cycle services, including maintenance and repair operations. For instance, the company has an agreement with Arctia Oy on the maintenance of the multi-purpose icebreakers Nordica and Fennica.

We work in close cooperation with our partners and utilise the best expertise each operator can provide. The extensive and versatile shipbuilding experience found from both RMC and our network of partners forms a solid foundation for life-cycle operations. The diversity of our network ensures that we find the correct people and skills for every project.

The RMC facilities at Seaside Industry Park Rauma enable us to provide a comprehensive service concept. In addition to one of the largest dry docks in the Baltic region, the heavy-duty shipyard cranes and versatile workshop facilities provide excellent life-cycle services. Our construction halls are suited for the production and surface treatment of cross-sections of up to 300 tonnes. The sections are transported to the dry dock with specialised carts.

In the autumn of 2015, Rauma Marine Constructions carried out the modernisation of the ferry M/S Silja Serenade, which operates between Helsinki and Stockholm. The project included both surface renovations visible to passengers and technical upgrades.

The ship’s bottom was repaired, its steering system was upgraded, and one of the main engines was fully serviced. An extensive overhaul was also carried out for the seventh deck, and all 60 deluxe cabins onboard were fully modernised during the two-week dry docking.

The modernisation of the Silja Symphony took place in early 2016. The vessel received similar alterations to its sister ship, Silja Serenade. All family cabins on Symphony were modernised, and deluxe cabins were redecorated. As with Serenade, the conference area lobby was also renovated.

In addition to this, the Old Port Pub in the ship’s aft received new surfaces and furnishings, and a new entrance to the pub and concert stage was constructed on the Promenade.

The extensive conversion work for the Arctia icebreaker Otso was carried out at the RMC shipyard early in the summer of 2015. During the project, Otso was converted to a specialised vessel capable of more versatile tasks.

The ship was fitted with a roll stabilisation tank to enable open water navigation. The conversion also reinforced the ship’s structures in order to upgrade its ice class to match Arctic requirements. In addition to this, the hull was reinforced, and the vessel was fitted with new lifeboats and a helicopter deck, both of which meet international standards.

Originally designed for the Baltic Sea, the converted Otso can now operate anywhere in the world. The three-month-long conversion project employed dozens of people in Rauma.

The nearly-30-year-old research vessel Aranda, owned by the Finnish Environment Institute (SYKE), underwent a general overhaul at the RMC shipyard in Rauma beginning at the end of summer 2017. The vessel was handed over in the summer of 2018.

The overhaul was done to ensure that Aranda will be fully operational into the 2030s. During the overhaul, a brand-new block was added to the central section of the vessel. In addition, the vessel’s aft and afterdeck were redesigned. The vessel was extended by 7m in total. This allowed the expansion of research and laboratory facilities and the moving to an entirely electric power transmission which adheres to new standards.

As a result, the overhauled vessel is more environmentally friendly since it can run on biodiesel fuel all year round and make short trips with just battery power. The new battery technology cuts emissions and significantly decreases the noise caused by the vessel, making it easier to study sea life.

Rauma Marine Constructions has an agreement with Arctia Oy on the maintenance of the multi-purpose vessels Nordica and Fennica. The first round of maintenance work by RMC took place in early 2015.

Some 50 metalwork, surface treatment and electrical installation professionals from Rauma Marine Constructions’ network of partners worked on the icebreakers.

Both multi-purpose vessels have strong ties to Rauma. Fennica was launched from the Aker Finnyards shipyard in Rauma in 1993, along with its sister ship Nordica one year later.